Georgetown Homes and Condos for Sale

Georgetown is a historic neighborhood and commercial and entertainment district located in Northwest Washington, D.C., situated along the Potomac River. Founded in 1751 in the Province of Maryland, the port of Georgetown predated the establishment of the federal district and the City of Washington by 40 years, representing the glamor of old Washington.  From Federal townhouses and Georgian mansions on gas-lit streets to the gothic spires of the university and the industrial chic of the waterfront, today’s Georgetown residents effortlessly combine tradition and trendiness.

Georgetown's charm brings many tourists and shoppers, which can lead to congestion.

Georgetown is a charming historical and sophisticated village. Visitors can enjoy a ride by bus, taking the yellow circulator, and appreciating historic places, which many offer guided tours.  The place is renowned for federalist architecture, historic brick and frame row houses, cobblestone streets, and grand estates dating back as early as the mid-1700s. Visit these historic places, many of which offer guided tours.

People who appreciate fashion and the finer things in life.

Georgetown is one of the oldest and most upscale quiet neighborhoods in Washington DC. It is home to historic million dollar row houses, the prestigious Georgetown University, the C&O Canal, and the famous "Exorcist Steps" which connect M Street to Prospect Street. Georgetown has a lot of character; Its brick sidewalks, hanging pink flowers from lampposts, and historic architecture.

WHAT NOT TO EXPECT

A busy place with a lot of nightlife.

While other parts of the city are undergoing considerable transformations with an influx of new residents and restaurants, the pace of change happens much more slowly in Georgetown. IIt is characterized by being a quieter place, with little nightlife. Civic associations and long-standing businesses work together to ensure that new additions and alterations reflect the neighborhood's history.

Some of the most exclusive row houses and mansions in the city date back to the 19th century.

The village offers some of the oldest and most exclusive row houses and mansions in the city. A neighborhood with a national reputation, walkable streets, and a peaceful atmosphere has its cost. The average sales price of a two-bedroom house is currently $860,000, three-bedroom homes are selling for an average of $1.35 million. There are smaller houses of $500,000.

YOU’LL FALL IN LOVE WITH

The streetscapes of the neighborhood and the lifestyle inspired by fine dining make it a pleasant place to live.

All of the streets are adorned with stunning architecture, and meticulously maintained gardens thrive throughout the springtime.

There are numerous places to spend evenings ranging from the traditional family restaurant to bars, upscale lounges, and low-key hangouts, enjoying little cafes and jazz around the town.

Located next to the Potomac River, south of Woodley Park and west of Dupont Circle, Georgetown is centered at the intersection of M Street NW and Wisconsin Avenue NW, where you will find exclusive antique stores, trendy boutiques, upscale restaurants, nightclubs, and pubs, including Georgetown Cupcake, which opened in early 2008.

$685,000
1 Beds ⋅ 2 Baths ⋅ Courtesy of Compass
Unbelievable opportunity to live in the heart of Georgetown! This gorgeous 1 bed, 1.5 bath unit over 1,100 SQ FT is a must see! This beautiful home features hardwood floors, skylight windows, views of the Washington Monument, a private balcony, recessed lighting and ample storage. The bright living room is perfect for lounging while sitting near the fireplace and flows nicely to the dining area with a custom bar. The private balcony is off the living room and nice for your morning coffee or enjoying a good book. Take in the incredible views of the Washington Monument from your balcony. The fully-equipped kitchen features stainless steel appliances, plentiful cabinet storage and an in-unit washer and dryer hidden out of sight in the closet. The primary suite also has access to the private balcony and includes an ensuite bathroom with a walk-in shower. The building includes a concierge, common areas, an elevator and an outdoor pool. Plenty of rental parking available under the building. Located in a prime location - minutes from Georgetown's best dining and shopping options including favorites like Clyde's, Fiola Mare, Filomena, Sequoia, Farmers Fishers Bakers, and more! All square footage and dimensions, though compiled from sources deemed reliable, are estimates.

$899,900
2 Beds ⋅ 3 Baths ⋅ Courtesy of Keller Williams Chantilly Ventures, LLC
Gorgeous new high end kitchen remodel, everything brand new! Embrace chic city living in this stunning 2 bedroom, 2.5 bath penthouse condo located in the heart of Georgetown’s Waterfront, and only steps away from the area’s finest restaurants, shopping, and nightlife the area has to offer. Located in the upscale and amenity filled Washington Harbour Condominium with 24 hour concierge, security, and reserved garage parking, this home boasts 1,758 square feet of living space on 2 levels and partial water & city views of the Potomac River and Georgetown! An open floor plan, balcony, decorative moldings, custom built-ins, fireplace, and an abundance of windows creating a light and airy atmosphere are just a few features making this home so special. A brand new renovated kitchen, with new cabinetry, fixtures, stainless steel appliances, fresh on trend neutral paint, newer hardwood floors, a gracious owner’s suite, and remodeled baths create instant move in appeal. ****** A formal foyer welcomes you home and ushers you into the dining room with rich hardwood floors, warm neutral paint, crisp crown molding, and a custom wet bar and built-ins. The living room with a cozy gas fireplace features a sleek picture window and French doors granting access to the balcony, seamlessly blending indoor and outdoor living. The brand new kitchen is sure to please the modern chef with beautiful new quartz countertops, pristine white shaker style cabinetry, new fixtures, undermount sink, and new and quality stainless steel appliances including a gas cooktop, double wall ovens and French door refrigerator with ice/water dispenser. A lovely powder room compliments the main level. ****** Ascend the curving stairs where you’ll find the gracious owner’s suite with a built-in dressing vanity, walk-in closets, and a wall of windows. The luxurious en suite bath features a dual sink vanity, sumptuous jetted tub, and glass enclosed shower, all enhanced by beautiful marble, the finest in personal pampering! A 2nd bright and cheerful bedroom has custom built-ins and private bath marble bath. Loads of closet and storage space, a laundry room with full sized washer and dryer, and an assigned garage parking space complete the comfort and luxury of this wonderful home. ****** Take advantage of the spectacular community rooftop deck and pool that delivers panoramic views, perfect for relaxing with family and friends. All this in a fabulous building with doorman, 24 hour concierge, gorgeous lobby, elevator, fitness center, shuttle to Metro and more! Nestled in a courtyard style plaza in the heart of Georgetown’s waterfront with loads of dining, shopping, and entertainment just outside the door including Georgetown Waterfront Park and the Potomac River just steps away!

$2,855,000
4 Beds ⋅ 5 Baths ⋅ Courtesy of H.A. Gill & Son
New listing of lovely house with redone interior set on a beautiful lot with very large patio. Set for completion in September or October. Still in a state of construction. There is a curb cut that could mean one parking space is available. Neither owner nor listing agent can guarantee. If you would like to view the interior please contact LA.

$1,395,000
3 Beds ⋅ 2 Baths ⋅ Courtesy of TTR Sotheby's International Realty
Great investment opportunity. Currently leased for $6,800 per month until May 31st, 2023. This semi detached federal townhouse is in the highly sought after West Village of Georgetown and is less than a block away from the countless amenities and restaurants on M Street, NW. Three bedrooms, 2 full bath house across three levels which includes a finished lower level. Large rear terrace and pergola.

$4,100,000
3 Beds ⋅ 4 Baths ⋅ Courtesy of TTR Sotheby's International Realty
Elegant West Village Georgetown townhouse with designer finishes featured in multiple magazines. Original interior design and former home of renowned designer Frank Babb Randolph, has a sophisticated style enhanced by the current owners. A recent renovation to the floor plan by renowned architect Christian Zapatka created a more open second floor with powder room. The formal marble entry hall has a half bath and leads to the lower level family room. The second floor has a spectacular living room with 13 ft ceilings, fireplace with decorative alcoves and french doors overlooking the garden. The Jennifer Gilmer designed eat-in kitchen features custom cabinets with a large island, Subzero refrigerator and freezer, Thermador Pro Grand 48” double oven, Shaws farmhouse sink in the expansive kitchen island. The large dining room is open to the kitchen and is perfect for entertaining. The third floor features a generous primary suite with a view of the Washington Monument, walk in closet and a large marble bathroom with a skylight. Two ample guest rooms with hall bath complete the top floor. The open floor plan lower level family/media opens to the large rear terrace. Garage and a driveway!

$2,175,000
5 Beds ⋅ 4 Baths ⋅ Courtesy of Cottage Street Realty LLC
Welcome to this large and stately Georgetown townhouse in the Cloisters community. Quality construction boasting over 3600 square feet, five bedrooms, 3.5 baths, four wood burning fireplaces, and two dedicated parking spaces. Custom built-in shelves and cabinets were installed in 2017 in the family room and upstairs landing, along with a new roof.New deck and flooring in the lower level. Two skylights bring natural light to top level. Dual walk out to deck on the main level and patio on the lower level.

$899,900
2 Beds ⋅ 3 Baths ⋅ Courtesy of Compass
Luxurious 2 bed, 2.5 bath unit with an incredible layout and private balcony in the heart of Georgetown at Flour Mill Condominiums. Stunning hardwood flooring and an abundance of natural light welcomes you to the move-in ready home. The spacious balcony creates an outdoor extension to the space and offers views of the Potomac River. The stylish gourmet kitchen offers plenty of counter space with stainless steel appliances. Off the kitchen, there is plenty of room to dine and entertain guests in the open layout. Both bedrooms are large with en-suite bathrooms. Stacked laundry and tons of bonus closet space complete this must-see flat. Located between blocks with historic ambience and modern conveniences, The Flour Mill offers immediate access to M Street's countless shopping and dining options. A true MUST SEE for anyone considering Georgetown as their next home.

$2,900,000
5 Beds ⋅ 5 Baths ⋅ Courtesy of TTR Sotheby's International Realty
This elegant two-level 3,500 square foot penthouse at the boutique Madelon in the heart of Georgetown is an entertainer’s dream! The oversized living room with fireplace provides access to a remarkable, 600 square foot private terrace with Washington Monument views. A circular flow leads to a prodigious 26’ dining room perfect for hosting unforgettable dinner parties. The custom gourmet kitchen features a WOLF gas stove and hood, WOLF double wall oven, extra large paneled SubZero refrigerator, custom cabinetry with quartz countertops and an island. The tasteful breakfast room accommodates casual dining and has a built-in Subzero wine refrigerator, pantry, and additional storage. A spacious library, a bedroom with a full bath, powder room, and laundry room round out the second level. The skylit central stairs lead to the four bedrooms on the first floor. The owner’s suite has a gracious walk-in closet and oversized full bath with marble mosaic tile floor, custom frameless glass shower with incorporated oversized soaking tub as well as a separate stall shower and white vanity with dual sinks. A second owner’s bedroom suite enjoys en-suite bath and walk-in closet. Two additional bedrooms share a hall bath. Residents of The Madelon enjoy a private rooftop pool, terrace, and concierge. The pet-friendly building is directly above Cafe Milano, Peacock Cafe, Brasserie Liberte and steps to all of the amenities of Wisconsin Avenue and M Street. Stroll down the street to grab a double chocolate chip Levain cookie for a breakfast, catch a spin class at SoulCycle or walk along the Potomac River at Washington Harbour before returning home to entertain friends, business associates and family in this magnificent home. 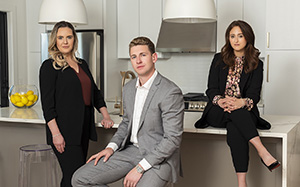 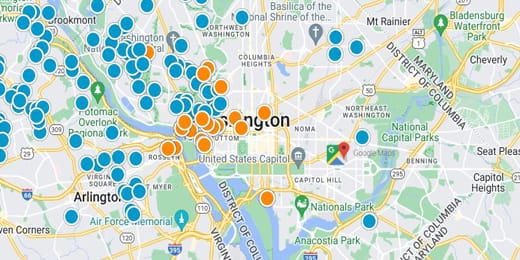 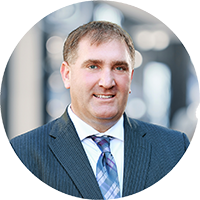 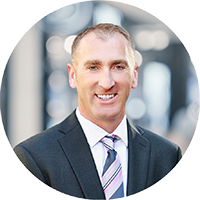